Here Are 5 Of The Most Expensive Communities In Pennsylvania

Here Are 5 Of The Most Expensive Communities In Pennsylvania 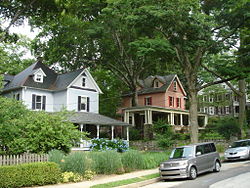 Are you one of many Pennsylvanians living in a gold mine? Maybe so. Here are five of the most expensive communities in the state.

With a population just over 5,000, Fort Washington is a premiere suburb of Philadelphia. The median income for families is well over $100,000, with men earning an average of $76,000 annually and women bringing in just under $40,000 per year. Tradition seems to rule in the suburb as men are typically the breadwinners in Fort Washington who gain enough wages so that their wives can stay home with the kids. Speaking of kids, Fort Washington has a good schooling system funded by the Upper Dublin School District and Colonial School District.

Broomall is a suburb of Pennsylvania located in Delaware County. The 2010 census revealed that nearly 11,000 of the state’s residents call the area home. Houses for sale in Broomall can be as high as $4 million and as low as $300,000. The variety of pricing gives individuals with average income the opportunity to live alongside more wealthy residents.

Located in Montgomery County, Wyncote is a small community with close-knit neighbors. One of the best things about the city is its diversity. You can buy a traditional single-family home in Wyncote or opt for a more modern approach of luxury apartments. The Towers, in particular, is a luxury apartment complex that gives young entrepreneurs the opportunity to live in suburbia while enjoying urban elements.

Bryn Mawr is an up-and-coming area that has a college and restaurants. Since the region is a part of the Lower Merion Township, all students attending public school must do so under the umbrella of the Lower Merion School District (LMSD). The median age in Bryn Mawr is 22-years-old. There are, however, several thousand residents over the age of 65.

Named after the Berwyn mountain range in Wales, the suburban city is living up to its heritage. A six bedroom home with five bathrooms can sell for more than $3 million. By the same token, a four bedroom home can cost as little as $400,000.

Here at Caymus Realty Solutions, we seek to give you an alternative to the traditional buying and selling process. We pay cash for houses and offer you fair market value for properties. Learn more about our services here.